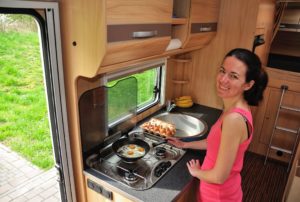 You know the old saying: A penny saved is a penny earned.

And in the world of RVing, it’s a penny you can put toward even more awesome adventures. Or, let’s be honest — toward that unexpected, but totally unavoidable, repair bill. #RVlife, am I right?

But no matter what plans (or lack thereof) you may have for your hoarded pennies, sticking to a travel budget is just plain old common sense. It’s too easy to take a reckless, YOLO approach when it comes to your finances, especially while you’re on vacation… but there’s nothing more sobering than facing sticker shock — and the realization that your next trip is now consequently even further off in the distance — as soon as you roll on home.

But if you put just a little bit of forethought into your travel expenses and exercise a modicum of self-control, you can have your adventure and actually experience it, too.

Here are eight simple, but genius, ways to save money while traveling in your RV. 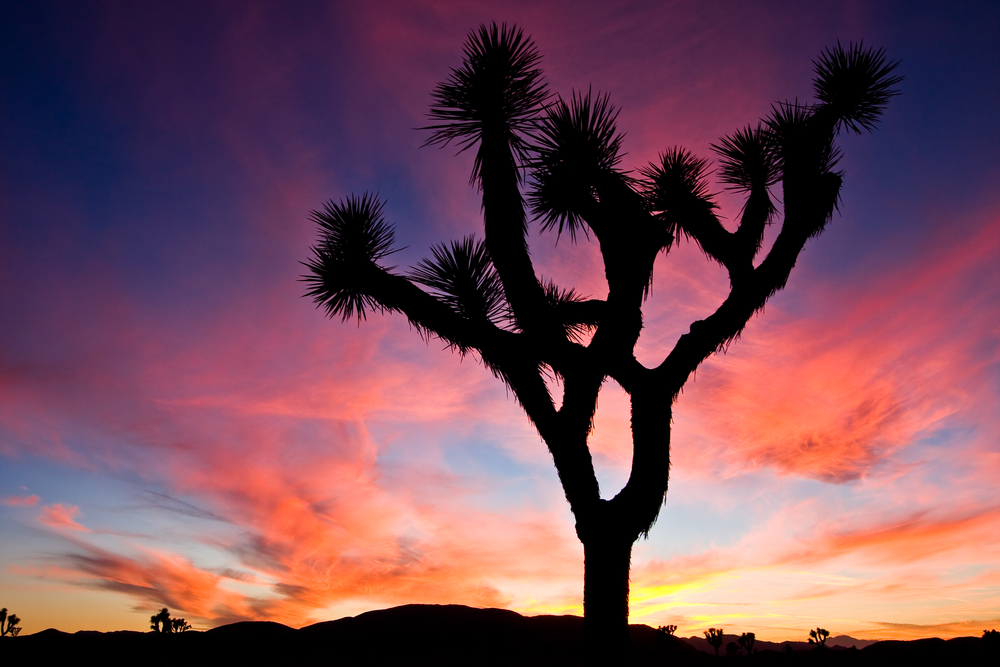 It’s a simple fact of life: New York City costs more than Mobile, Alabama, whether you’re there to visit or to stay.

Of course, if your dream destination happens to be expensive, you should still go; it’s unlikely than an alternative trip will satisfy your craving for that particular experience.

But if you’re at all flexible or still figuring out your route, take each potential destination’s general overall costs into consideration. You can look up area campground fees ahead of time, and also check out the cost of grocery staples and everyday purchases and activities (like grabbing a beer or a latte or seeing a movie) on sites like Expatistan and Numbeo.

In general, you’d do well to stay away from big cities and coastal areas, though there are some exceptions to the rule and when you go does matter. Even National Parks can get surprisingly pricey in the crowded summertime, so make sure you know what you’re getting into — even if your trip sounds affordable on paper.

Which leads us to our second piece of advice… 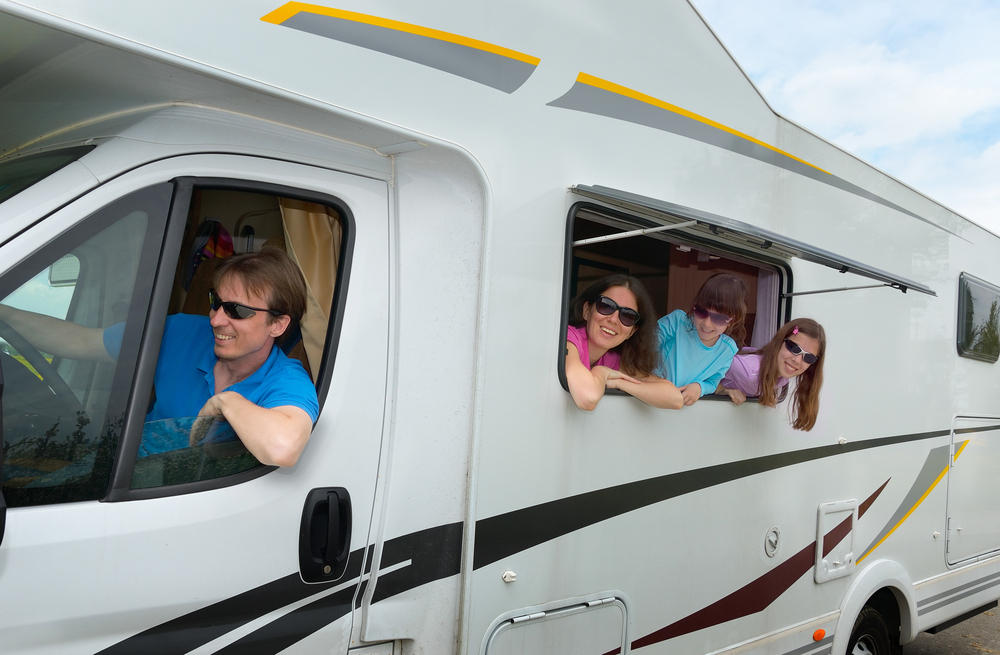 Shoulder season, if you’re unfamiliar, is a given area’s “off” season, or the time when it draws the fewest number of tourists. Which means prices are lower for almost everything and you’ll deal with fewer and smaller crowds. Total win, right?

Of course, these seasons generally are when they are for a reason; perhaps the weather isn’t at its best or it isn’t a convenient time of year for most families to travel. But if you’re not afraid of a little rain, have wiggle room in your itinerary and aren’t governed by your children’s school schedule, consider taking advantage of an area’s lapse in tourism and letting your dollars stimulate their dormant economy. They’ll thank you by not asking for quite so many of them!

3. When it comes to fuel, you’d better shop around. 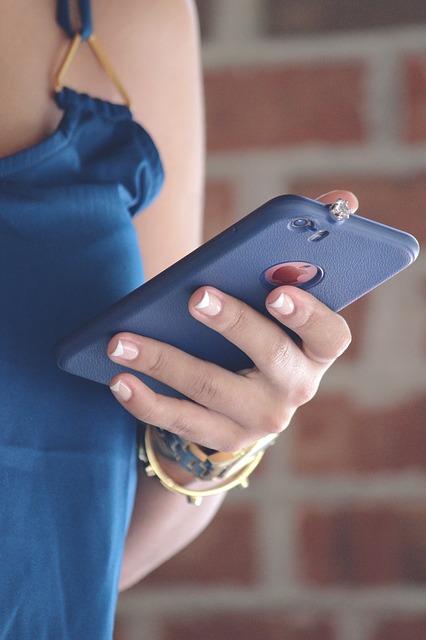 You might roll your eyes at driving an extra ten miles to save a cent or two per gallon when you’re tooling around town in your sedan.

But even the smallest and most efficient RVs are gas guzzling beasts compared to what you probably usually drive, and big Class A motorhomes sometimes get as little as six miles per gallon. Oh, and did I mention the gas tanks hold up to 150 gallons of fuel?

Trust me, when it comes to a fill-up like that, you’ll want to save every cent you can. When the tank’s getting low, use an app like GasBuddy to see which station in your area is offering the most affordable fuel — but make sure to give yourself a couple of good options. Not every station is set up for a big RV to get into and out of easily, and you don’t want to get stuck! 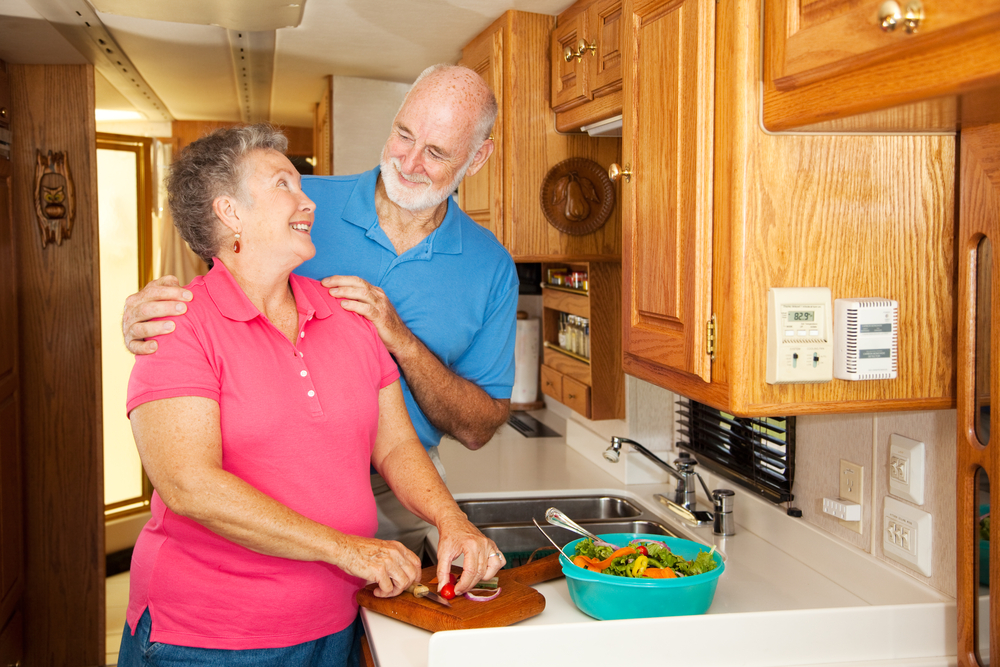 Just like at home, it’s basically always cheaper to make meals from scratch than it is to eat out at restaurants. Yes, even cheap ones. No matter what you make, you’ll almost certainly have leftovers to eat at another meal. Plus, you have full control over exactly what goes into your food, allowing you to eat more healthfully.

Besides, I can’t think of even one other form of travel that lets you literally bring the kitchen sink along for the ride. The convenience of having a kitchen on your road trip is part of the reason many people are drawn to RVing in the first place. Why wouldn’t you take advantage of it? 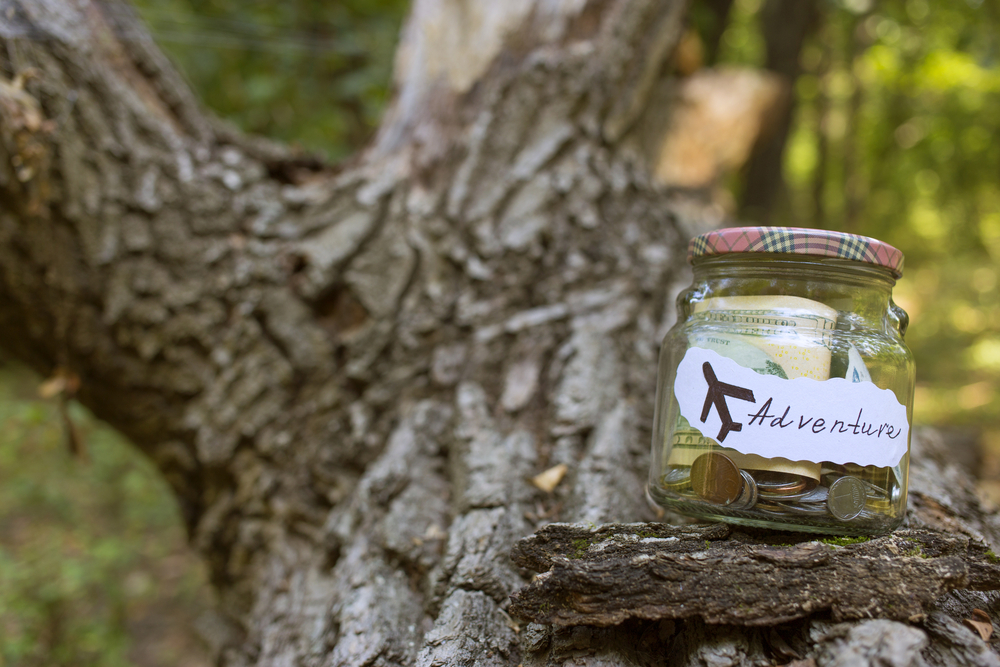 Yes, spontaneity is probably one of the things that attracted you to the road.

But getting caught short without a place to stay, enough food for dinner, or enough gas in your tank can make for some expensive scrambling.

Do enough planning to avoid having to make an unexpected and pricey purchase, whether it be for the top-of-the-line campground that happens to be the only one with a spot available, or an impromptu delivery dinner when you could have cooked your own. 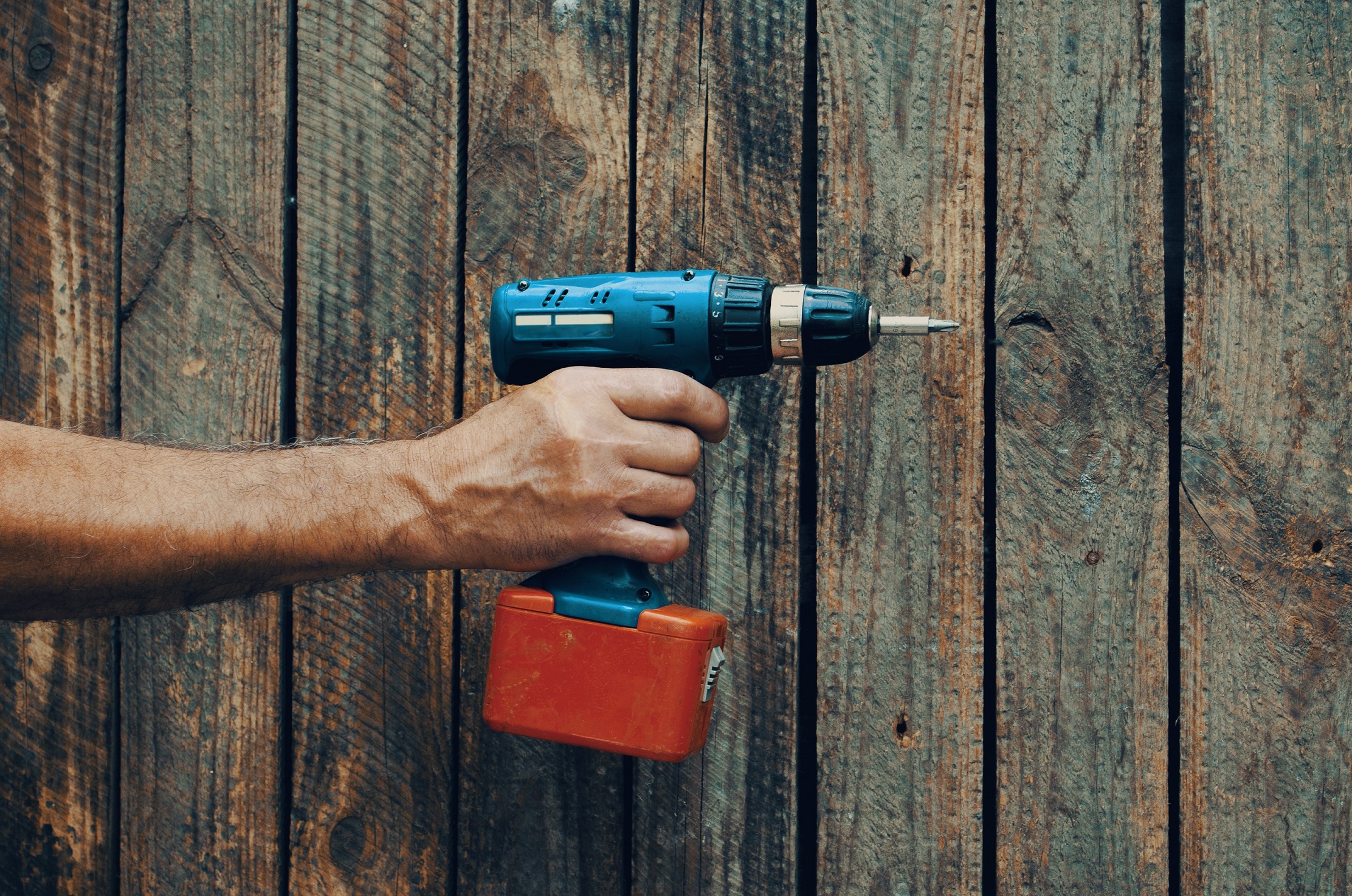 The only sure things in life are death and taxes.

And the only sure thing in RVing is that something is going to break. And it’s probably not going to be convenient or cheap to have professional repairs done during your vacation.

So take this opportunity to develop some basic handy(wo)man skills. You can start with simple things, like patching a roof leak or changing a tire. Even complicated-sounding tasks like replacing your sewer vent aren’t as difficult as they might seem, and you’ll save a ton of money that would have gone into a mechanic’s pocket. 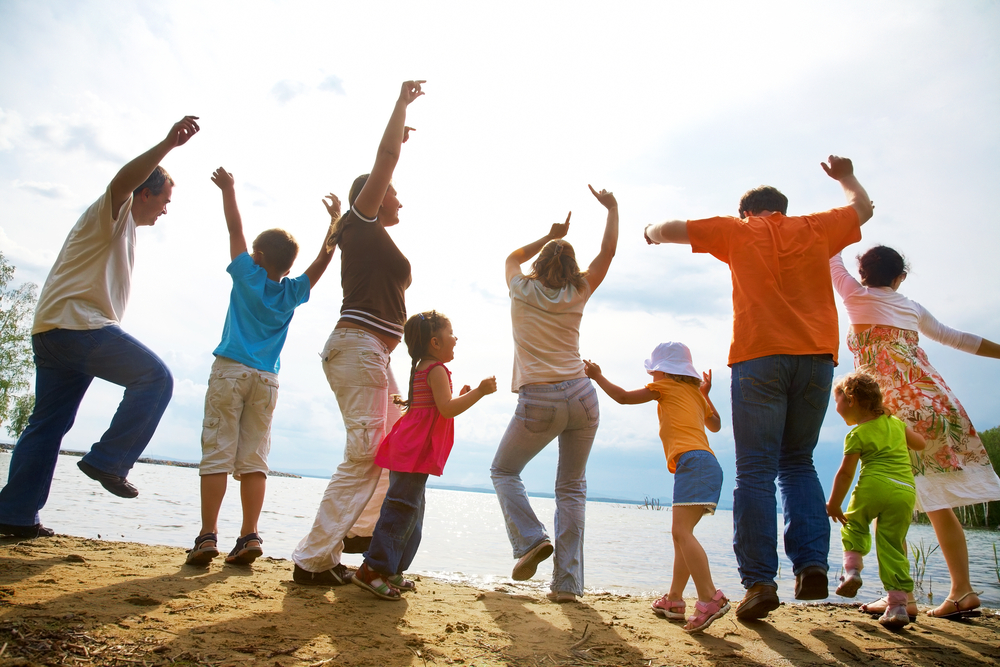 If you’re just starting out in the world of RVing, you might be shocked to learn exactly how many discount clubs and memberships you can join. Once you’re in a camper, it goes way beyond AAA.

Check out Good Sam and Escapees, which offer both discounts and extended support and social networks. There are also memberships that grant you access to cheap and unique camping experiences, like Harvest Hosts — which matches its members up with vineyards and farms that will allow you to spend a night or two on their property. Sure, you may end up buying a bottle… but it’s a much tastier way to spend that $30 than sinking it into hookup fees at a KOA!

8. Be adventurous — and try boondocking! 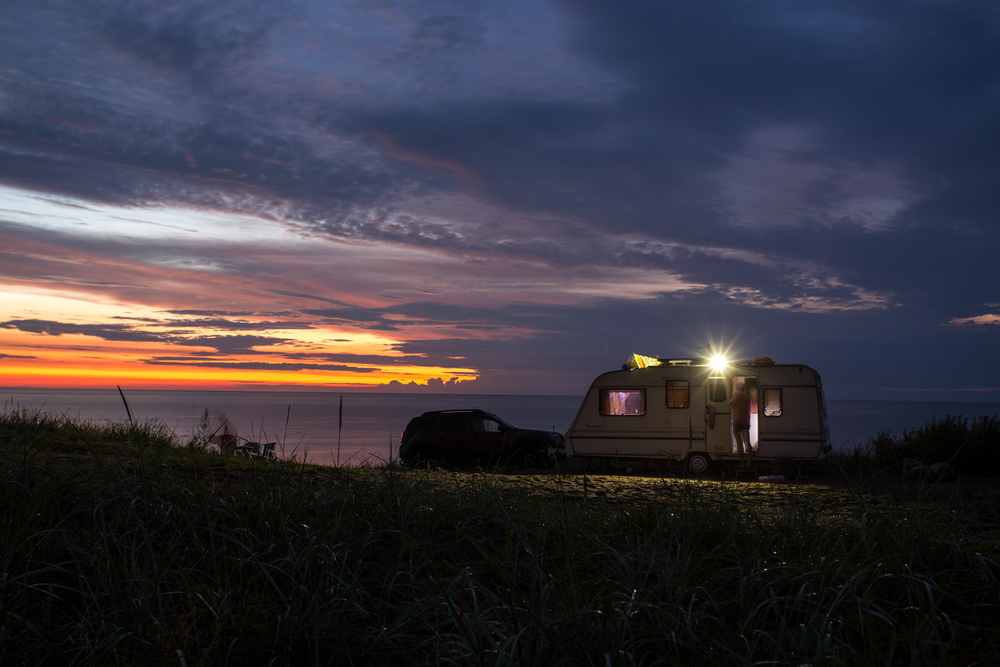 Even though camping fees might seem paltry when compared to hotel costs, even $15 per night can add up more quickly and easily than you think. But what are you gonna do? You have to have somewhere to park, right?

Well, yes, you do… but it doesn’t have to cost an arm and a leg. Or much of anything.

“Dry camping,” “dispersed camping,” “boondocking” — no matter what you call it, it all amounts to the same thing: camping on public lands without hookups. Sure, it’s a little bit more rugged than hanging out at the resort campground that comes complete with a swimming pool and rec room… but I mean, you do still have a mattress, so it’s not exactly roughing it!

Boondocking is an art in itself, from finding camping spots to learning how to maximize your time by conserving power and water. But with sites that allow you to camp for up to 14 days for a minimal fee (or even for free in some cases), it’s definitely a surefire way to save money on the road.

These are just a few easy money saving tips for beginning RVers, but there are tons of other ways to save cash while you travel!

Frugality works on the road just as it does in every other part of life. It might not be easy, but it’s definitely simple: Keep track of your finances, and don’t spend more than you can afford.

So, RVshare readers: What are your best tips for saving money while you travel? Let us know in the comments!

With Earth Day just around the corner, you may be wondering how you can celebrate the holiday with your kids….

Our 11 Best Tips for a Road Trip With Friends

Taking a road trip with friends can be an incredible experience. It’s the perfect way to reconnect with old friends…

Protecting Land, Water, and Wildlife: How You Can Help Conservation Efforts This Earth Day

Earth Day is just around the corner. Obviously, we should always be finding ways to help conservation efforts. However, this…

National Parks and the Military: Benefits and Services for Active Duty Military and Veterans

The national parks of the United States are some of the best things about our country. Everyone deserves to explore…

Boosting Your Rentals Through Social Media

Renting out your RV is a business. A successful business requires some form of marketing. Previously, marketing required print work,…

Give Back to Your Favorite Parks! 6 Easy Things You Can Do

As an RVer, you likely spend a good amount of time in natural spaces. In many cases, these spaces are…