A camping trip just isn’t complete without a good old fashioned cookout. Whether you go the tradtional route and have a weenie roast or take a more gourmet approach to your camping meals, it’s tough to beat the taste of food cooked over an open fire.

That smoky, charred flavor of campfire foods tastes like summer and everything that’s great about it. 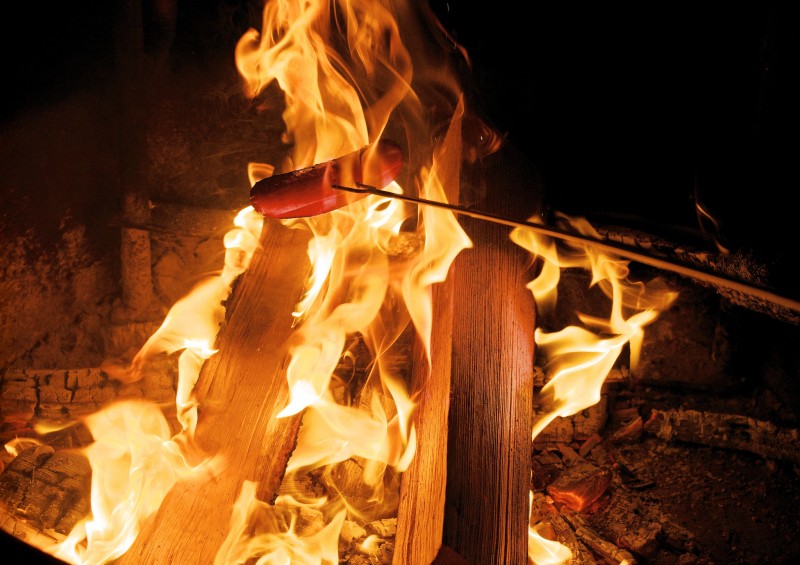 From the traditional to the unexpected, there are lots of things that you can cook in or over an open fire. Some require a grate, while others require little more than a stick, some foil, or some down home ingenuity. One thing’s for sure, though: they all taste amazing. Here are a dozen of our favorite campfire foods.

We know — this one’s a no-brainer, but a list of campfire foods without a mention of everyone’s favorite tube steaks would just be incomplete. Besides, hot dogs are easy to cook, everyone loves to eat them, and they’re an inexpensive way to feed a hungry crowd. Don’t forget to stock up on buns and an assortment of ketchup, mustard, relish, sauerkraut, and whatever other hot dog fixings you like.

Same goes for this one — you’ve probably already got these packed, but we can’t not mention marshmallows on a list of great campfire foods. They’re really the perfect end to any cookout; sweet, gooey, and lots of fun.

Graham crackers and chocolate bars are the traditional go-alongs if you’re making s’mores, but if you really want to up the ante, consider setting up a s’mores bar. This could include different types of crackers and cookies, specialty chocolates, flavored marshmallows, and add ons like peanut butter, bananas, caramels, and, if you’re feeling really adventurous, bacon. 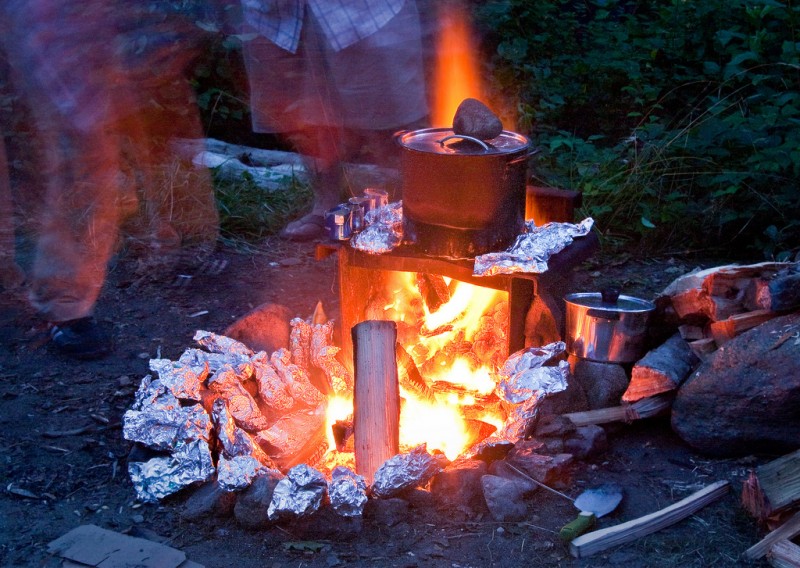 While kabobs may look prettiest when they’re an alternating hodge podge of meat and vegetables (and maybe even fruit), that’s actually not a practical method if you want your food cooked evenly, as vegetables will burn before your meat is cooked through. So, cook the veggies separately and focus on meat-only skewers. Whether you prefer chicken, beef, or pork, the process is the same.

This is perhaps the epitome of summer; the perfect summer vegetable, and the perfect summer cooking method. You’ve got two choices for how to do this. First, you can shuck the corn and wrap it in foil to cook on a grate or right in the fire itself.

Or, to really impart a smoky flavor, soak the whole ears in water for about a half hour, then throw them right on your cooking grate. The moisture will keep the husks from burning, and your efforts will be rewarded with the greatest tasting corn on the cob you’ve ever had. Whichever method you choose, cook the corn for ten to 20 minutes, depending on how toothsome you like it. 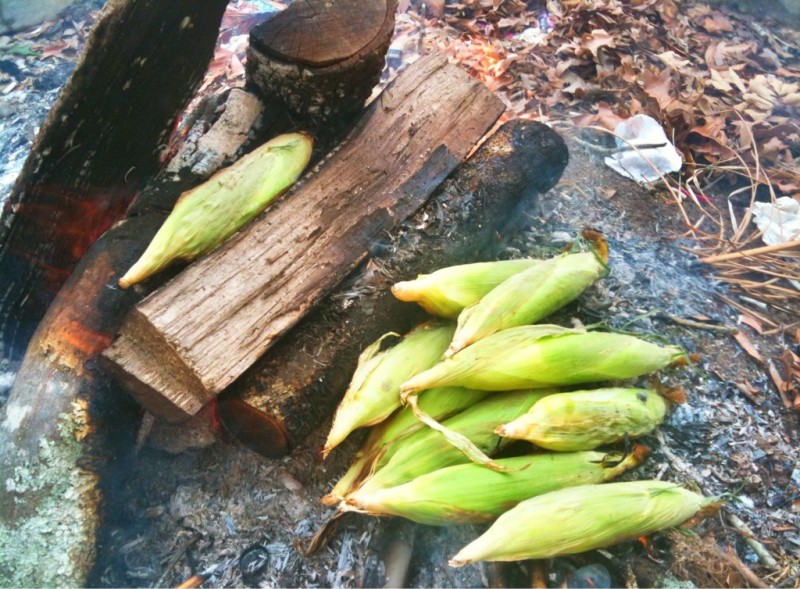 A whole potato, thrown right in the fire, beats an ordinary baked potato any day. Plus, you don’t even need a grate. Just rub a clean, whole potato with a little bit of olive oil and wrap it in two layers of foil. Then, put it right in the fire and let it cook for about 45 minutes to an hour, rotating it every 15 minutes or so. The general rule of thumb is one potato per person, but these are so tasty that you might want to cook a few extras.

Foil is your friend here, as these cook right in a foil packet with a drizzle of olive oil and whatever seasonings you like! What you want are one or two inch chunks of any vegetables you like, as long as they all take roughly the same amount of time to cook (this is important).

In other words, a vegetable like potatoes, which take a long time to cook, shouldn’t be put in the same packet with zucchini, which cooks rather quickly. Depending on what you’re cooking, these could take anywhere from ten to 30 minutes, though start checking them sooner rather than later as undercooked vegetables are usually better than overcooked vegetables.

You’d be hard pressed to find a person who doesn’t love nachos. They’re the ultimate sharing food, perfect at lunch time, dinner time, snack time — and, dare we say it, breakfast time? A campfire is an ideal heat source for melting cheese, plus it imparts a unique flavor that you just can’t get at home or at a restaurant.
What you will need for these is a cast iron pan, which can go right on top of the hot (but not furiously flaming) logs. If you do have a grate, though, you can just use a sheet pan or even a double layer of foil.

Movie night in your RV just isn’t complete without a bag of popcorn, but instead of making it in the microwave, take advantage of your campfire to pop up a batch. All you need are some popcorn kernels, oil, foil, and string to make some individual packets. Put a few spoonfuls of popcorn and a few spoonfuls of oil on a piece of foil, bring the edges together to make a loose bag, tie it to a stick, and hold it over the fire. Shake continuously until it’s all popped.

They may not be fancy or filled with cream (those are technically bismarcks anyway), but a simple cinnamon sugar donut fried over an open flame may be among the greatest campfire foods ever invented. Plus, they’re so easy, you’ll want to make them at home.

It all starts with a can of refrigerator biscuits — you know, the kind you whomp on the counter to open.

While this recipe does take a bit of prep work before you throw them onto the fire, it can all be done ahead (a few days ahead, before you even leave for your trip), which means you can wake up, get your fire started, and have hot breakfast burritos in about ten minutes. 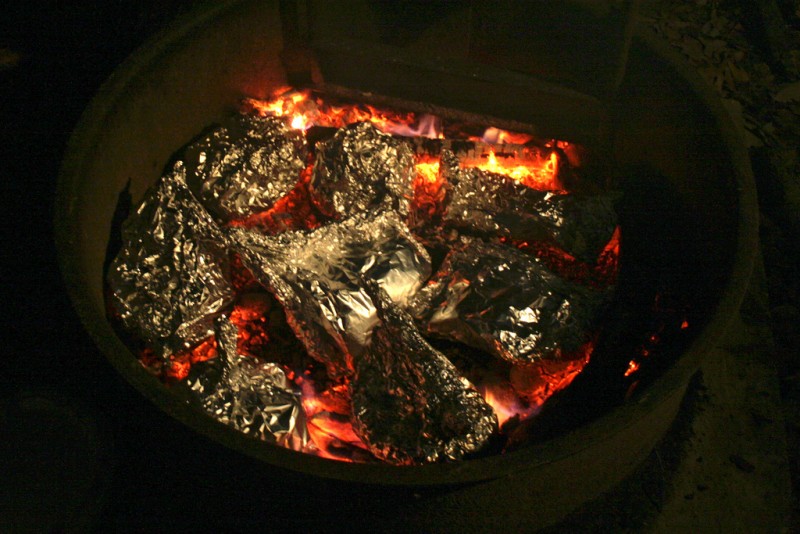 A super simple dessert or sweet snack, banana boats are deceptively delicious. Keeping the peel on, gently split your bananas lengthwise; you want them to still hold their shape, so don’t cut through the ends. Then, fill the split with chocolate chips, peanut butter chips, coconut, Nutella, honey, or whatever you’d like. Warm them on a foil covered grate until the fillings are sufficiently melted and the banana is hot, then devour with a spoon. Figure on one banana per person.

A campfire hack of baked apples, these are perfect for fall camping. To make, core apples and place each one on a double layer of foil. Fill each core with a pat of butter, a spoonful of sugar, and a few shakes of cinnamon. Wrap tightly, then place each apple on your coals. Roll them over after five minutes, then remove them from the fire after ten. Let cool a bit, carefully open the foil, and enjoy.

It doesn’t take much practice at all to become a true gourmand of campfire foods. In fact, many frequent RVers claim that they eat better when they’re camping than they do at home! Hot dogs may be great over an open fire, but branching out to cooking other foods on your campfire can turn any camping trip into a foodie paradise. Just don’t forget your creativity, your sense of adventure, and of course, an extra roll of aluminum foil.

RV travelers don’t necessarily slow down in the winter! With an entire country (or several) to explore, there are plenty…

Why Now is the Time to Start Booking 2021 Travel

2020 was, of course, a strange year for travel. It was disappointing for a lot of people. Many travelers who…

Q and A with The Travel Mom

We chatted with Emily Kaufman of the Travel Mom who recently took an RV vacation with RVshare. Emily has built…

Life has changed dramatically for most during 2020. We’ve been hit with a pandemic that has forced people to stay…

The Best (and Worst) Parts of Camping With Young Kids

Growing up, camping is what our family considered vacationing and traveling. I come from a family of seven, so camping…

5 Ways to Start a Fire in the Wild

5 Ways to Start a Fire in the Wild One of the best parts of camping is the campfire. Sitting…