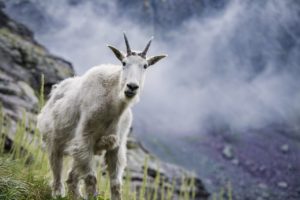 Getting outside is one of the most exciting parts of any vacation and an RV trip in particular. But going outside does come with its own set of safety considerations, not the least of which are the animals that call the great outdoors home.

Fortunately, following some basic wildlife safety tips can help keep you safe and sound no matter who (or what) you may encounter in your journey. From mountain lions to bears to moose, oh my! — here are some of our best tips and tricks for wildlife safety.

How Can We Be Safe Around Wild Animals?

In this post, we’re going to walk you through specific wild animal safety tips for all different types of animals. Each critter has its own set of protocols, and behaving the right way for a bear won’t do you any good if you’re dealing with, say, a mountain goat — or even a different type of bear.

That said, there are some basic precautions that work in pretty much all cases. For instance, you never want to intentionally approach a wild animal that you see, even if it seems like a great photo opp or a chance for an up-close encounter. The best practice is to leave a whole lot of physical space between you and any wild animal, even if it seems like a docile one. There are all sorts of horror stories about people approaching, or even attempting to touch, bison in Yellowstone National Park, for instance. Don’t be one of those headlines!

Another good rule of thumb is to always adventure outside in groups. Hiking alone can be dangerous in places with large populations of wild animals, particularly bears and mountain lions. Even in groups, it’s important to know what to do when you encounter a given animal ahead of time, and you might also consider taking extra precautions like carrying bear spray or bear bells.

Finally, be thoughtful when it comes to food and other items that produce lots of odors. Bears, as well as other kinds of potentially dangerous animals, are attracted to food scents, so keeping your campsite and hiking group free of those odors is a great way to avoid a potential run-in. Outdoor outfitters also sell bear-proof canisters for storing food if you’re backpacking or otherwise in a long-term outdoor scenario.

What Should You Do if You Encounter a Wild Animal?

Taking as many precautions as you can is a great way to get ahead of a potential animal encounter. But no matter how cautious you are, it’s always possible to come across a wild animal when you’re outside — after all, you’re traipsing through their homes!

Here are the specifics on how to handle some common critters you may encounter during a hike or camping trip.

What to Do if You Encounter a Bear

Bears are one of the animals campers most commonly fear — and hope — to see in the wild. While bears can, obviously, be very dangerous, they’re also very beautiful and seeing one in nature is a once-in-a-lifetime opportunity.

That said, it’s worth knowing what to do if you come upon a bear unexpectedly ahead of time, because your fight-or-flight instincts will almost certainly kick in and could put you in danger. It’s also important to understand that you want to react to different bears in different ways. 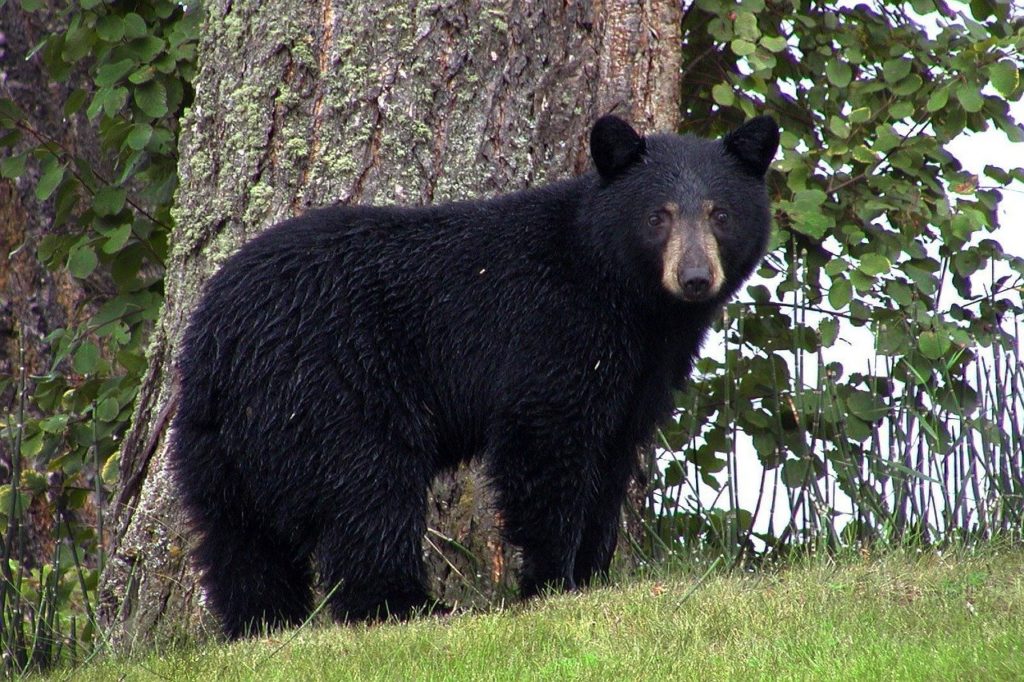 Black bears are more common than grizzly bears and are found in more parts of the country. They’re found on both the west coast and the east coast, and as far south as parts of Florida. Despite their name, they can be either black or brown but are differentiated from grizzlies by their straight face (as opposed to the dish-face profile of a grizzly), tall pointed ears, shorter claws, and generally shorter stature. 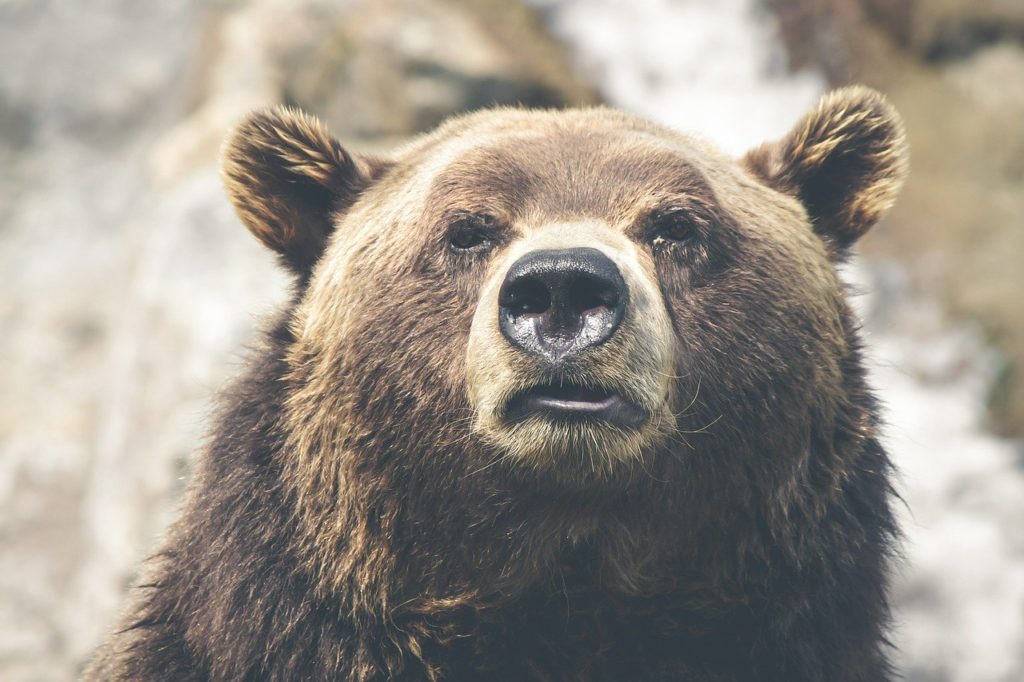 Grizzly bears,  or brown bears, on the other hand, live primarily in the northwestern part of the country, like Montana. Unlike black bears, they are usually brown and “grizzled” in appearance, meaning their hair varies in color along the length of one hair. They have short, rounded ears, a distinct shoulder hump, and are generally larger than black bears.

There are some general rules to follow no matter what kind of bear you may encounter, such as:

Although it’s rare, bears do sometimes attack humans. Bears are often bluffing when they charge, but if you are the victim of a bear attack, this is when the difference between the two bears matters.

If you are attacked by a grizzly bear, PLAY DEAD. Lay flat on the ground on your stomach with your hands clasped behind your neck for protection. (Leave you backpack on, as well, for this reason.) Spread your legs, as this will make it harder for the bear to turn you over. Remain still until the bear leaves the area. Only fight back as a last resort, as fighting back usually increases the intensity of a grizzly bear attack.

If you are attacked by a black bear, DO NOT PLAY DEAD. If you cannot escape, fight back, focusing your blows on the bear’s nose and muzzle.

What to Do if You Encounter a Snake

Snakes are super cool — but they can definitely be dangerous, and it’s hard to tell the difference between what’s harmless and what could kill you in a flash. 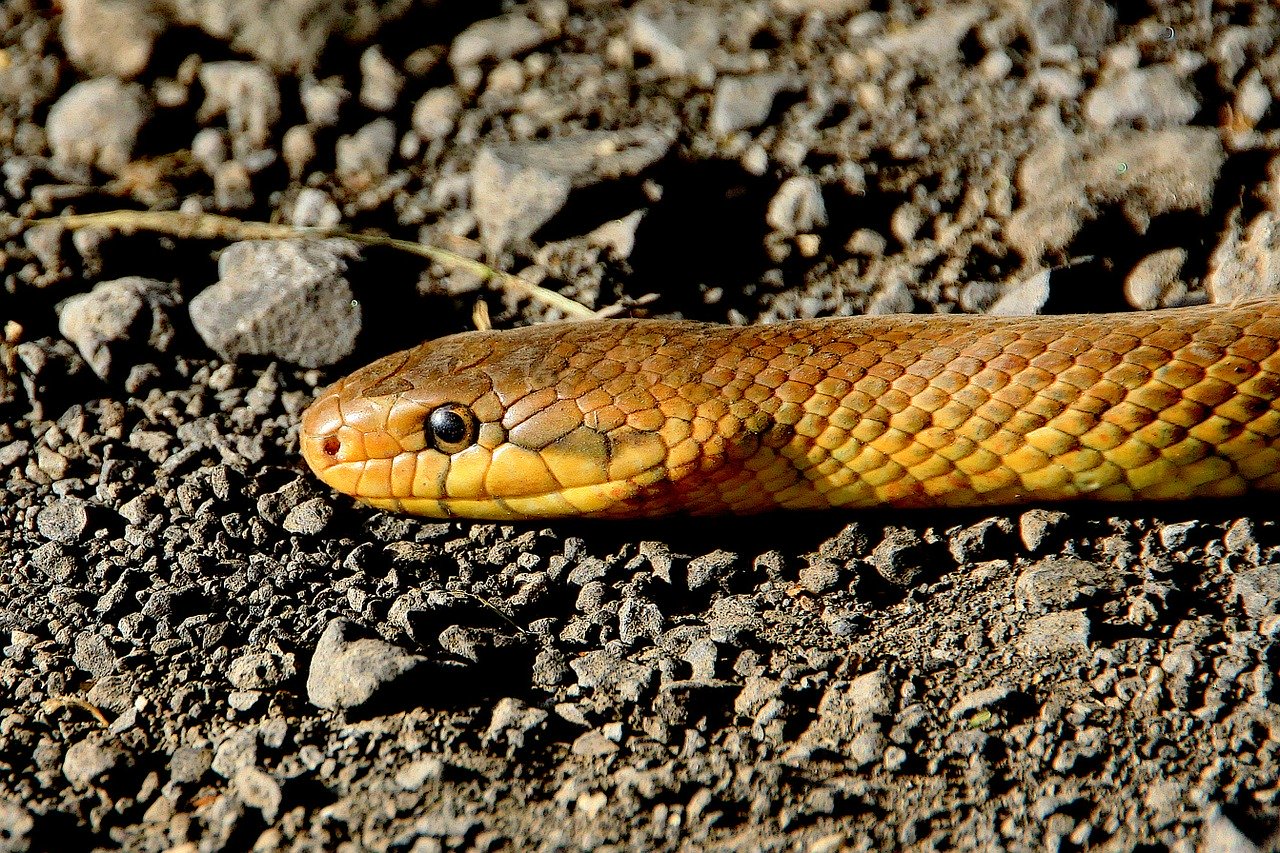 That’s why the best course of action if you encounter a snake, no matter what type it might be, is to give it a wide berth. You should never attempt to pick up a snake or try to engage with it, and if you’re bitten, you should treat it as an emergency situation.

That said, it’s important to remain calm if you’re bitten by a snake because speeding up your metabolism can speed the absorption of any toxin or poison that is present. Always ensure you know ahead of time if you’re hiking or camping in an area with venomous snakes and have emergency contact numbers and information handy ahead of time.

What to Do if You Encounter a Mountain Goat

Mountain goats are pleasant creatures, and really fun to run into when you’re out on a hike. That said, like other wild animals, they can do harm if provoked, and you want to maintain your distance. 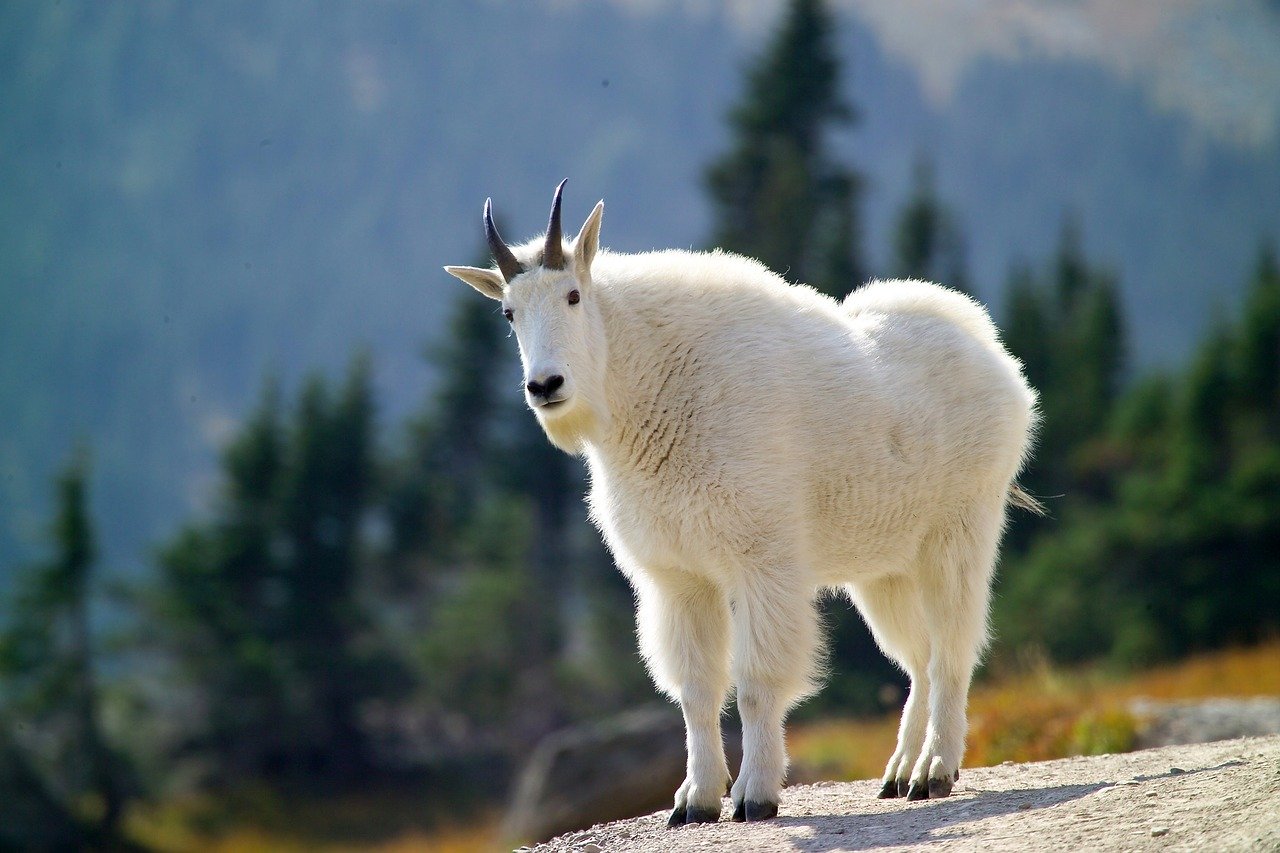 The National Forest Service recommends you stay at least 50 yards away — that’s half the length of a football field! You should not purposefully approach the goat, but if the goat approaches you, move slowly away to maintain your distance… and if the goat approaches more quickly, chase it off by yelling, waving a piece of clothing, or throwing rocks.

What to Do if You Encounter a Cougar

Cougars, mountain lions, pumas — these words all refer to the same big cats. But those big cats have some big teeth and claws to worry about! 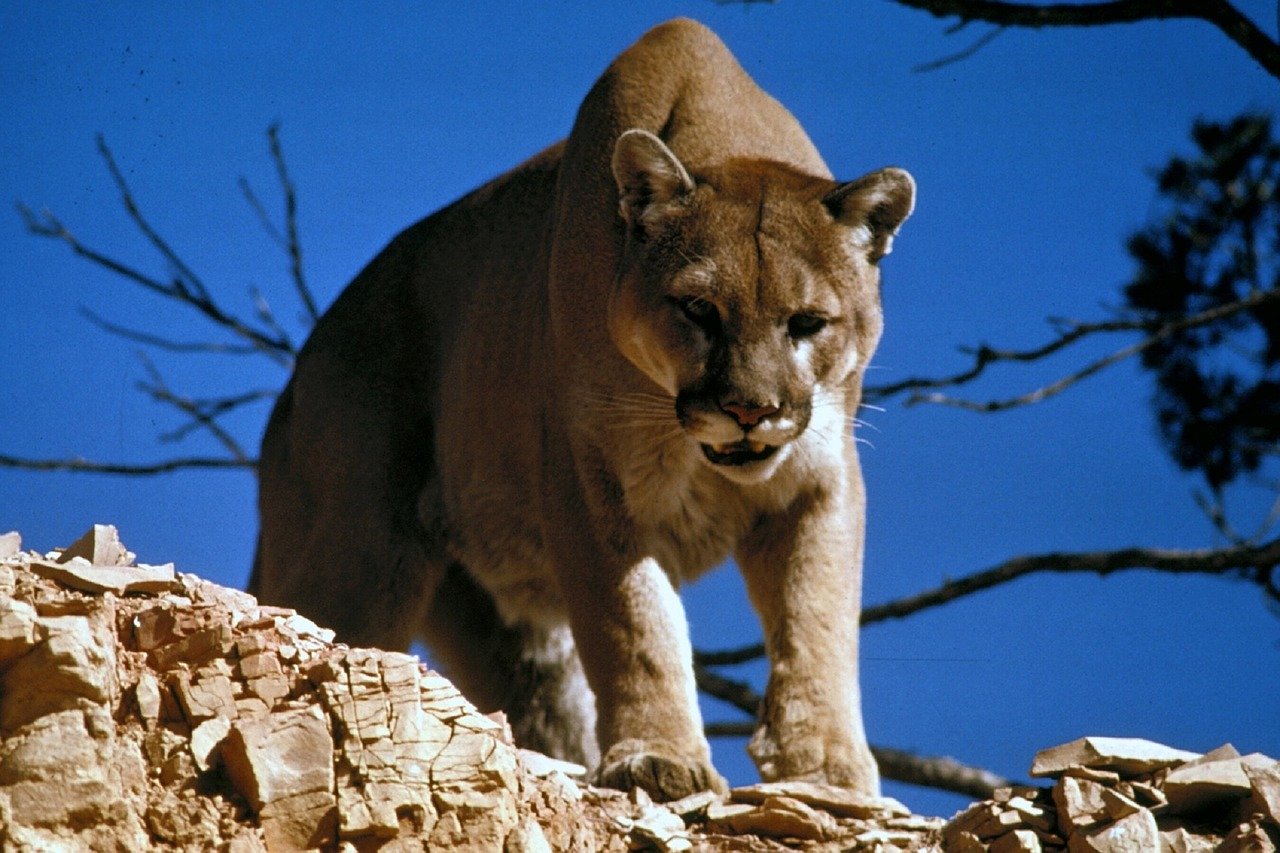 If you see a cougar in the wild, as you might in many parts of the western United States, you want to stay calm and avoid running. Maintain direct eye contact with the mountain lion and pick up any young children before backing away slowly. It’s also a good idea to raise your voice and speak firmly to the cougar, and avoid running at all costs as this may trigger a chase response.

In the unlikely event that a cougar attacks you, you should fight back with rocks, sticks, tools or whatever else is available to you.

What to Do if You Encounter a Moose

Moose are beautiful animals that are a joy to encounter in the wild — so much so that people who live in areas where moose are native know that a “moose jam” (a traffic jam caused when people see moose by the side of the road) is a real thing. 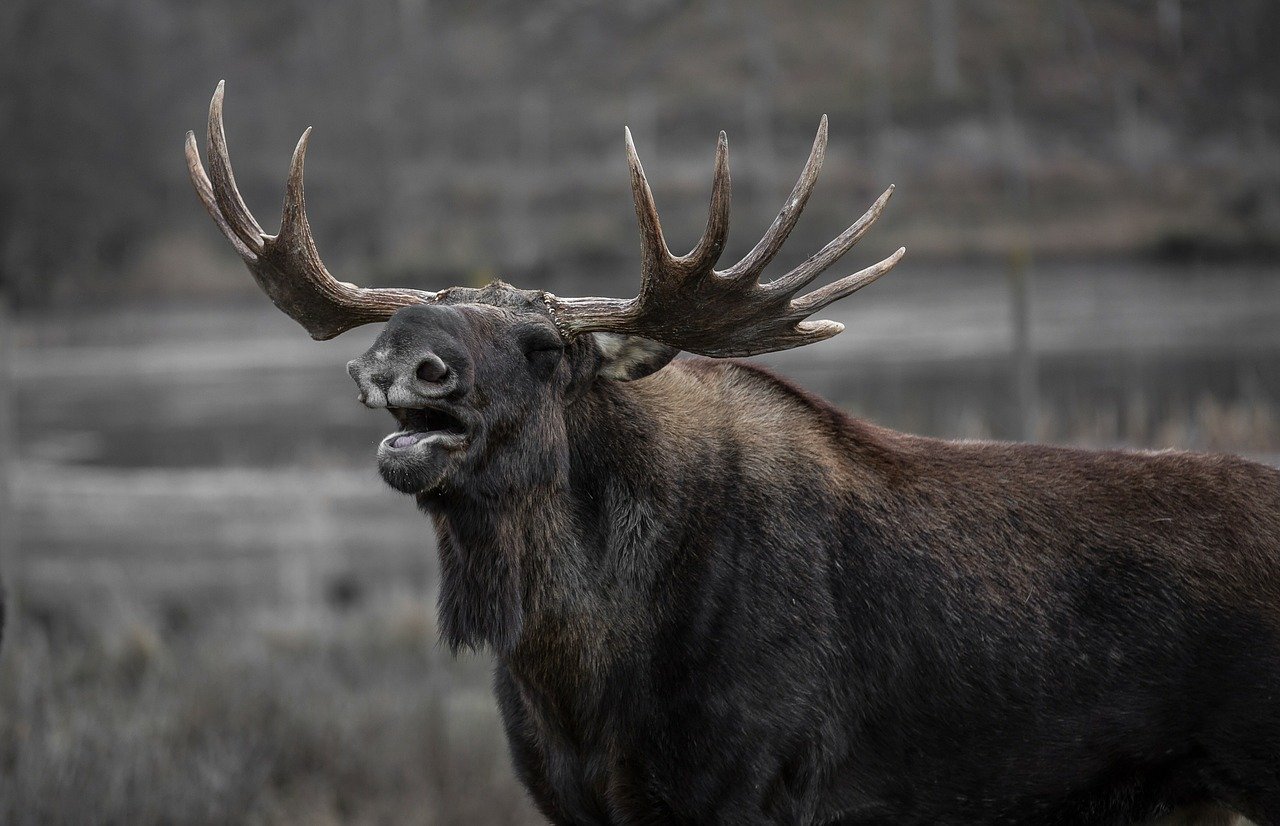 That said, if you encounter one on foot, you want to maintain your distance and behave respectfully, as they are large, powerful animals. In many cases, a moose might leave the area once it detects your presence, but in some cases, it will change its behavior to make you leave, in which case you’re too close. Warning signs of an anxious moose include rolling eyes, smacking lips and tossing head. In any case, if you’re close enough for the moose to change its behavior, you’re too close.

In the unlikely event that a moose charges you, you will want to actually run away — and try to place a tree or other obstacle between you and the advancing moose, per the Appalachian Mountain Club. Fortunately, the chances of such an encounter are vanishingly rare; more people die in moose-related traffic accidents than from injuries related to a moose charging.

What to Do if You Encounter an Elk

With females weighing in at as much as 500 pounds and males as much as 700, it’s important to treat these beautiful animals with respect. 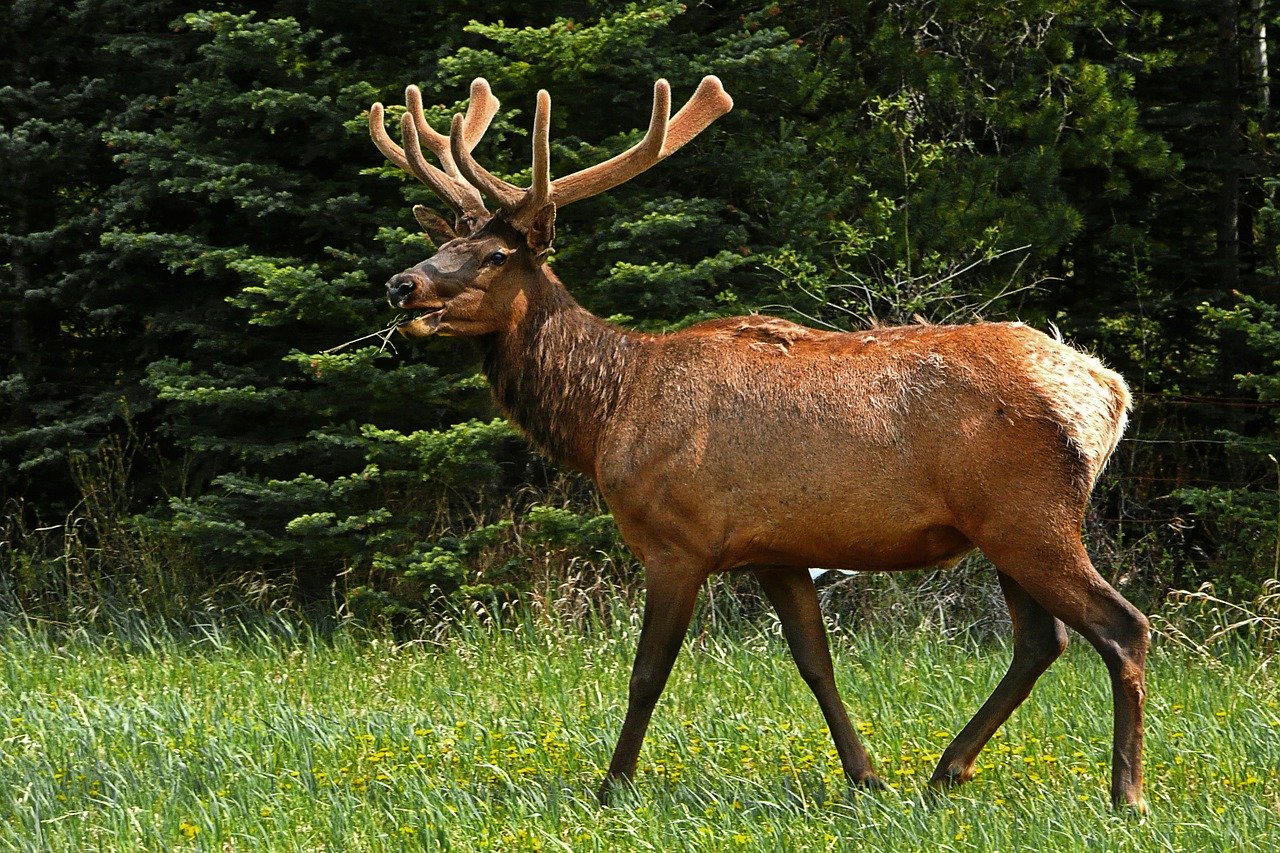 If you see an elk in the wild, maintain your distance — an estimate 50 yards or so, just as with mountain goats — and back away slowly if the elk start to approach you.

In the unlikely event that an elk attacks, don’t turn your back, but do flee. Protect your head and neck and seek shelter behind a rock, tree, or vehicle.

As mentioned above, the very best way to stay safe amongst wildlife is to figure out how to reduce wildlife encounters in the first place. Practicing thoughtful hiking techniques and checking with a local park service person before setting off on your adventure will help you have the best chance of maintaining your distance and safety — while hopefully still getting the chance to experience these creatures in their native habitats.

Remember, too, that even if you encounter an animal on the roadway, it is best to maintain your distance… but enjoy taking some photos through the window and seeing wildlife in its natural habitat!

Luxury Campgrounds: Are They Really Worth the Price?

Luxury Campgrounds Camping is great, and for many, roughing it is a jolly good time. However, for a great many…

National parks are part of many travelers’ summer vacation plans. So many, in fact, that the more popular parks can…

Staying in an RV is one of the best ways to travel on a fishing trip! You have plenty of…

How to Conserve Power While Boondocking

How to Conserve Power while Boondocking Boondocking is an incredible experience. It gives you the opportunity to escape into the…

How to Increase Towing Capacity on Your RV Rig

How to Increase Towing Capacity on Your RV Rig When purchasing a towable RV, there are a number of things…

How to Quiet Down Your Generator

How to Quiet Down Your Generator A generator is a fabulous thing when you’re an RVer. It allows you to…